0 Aguascalientes Diaspora around the world 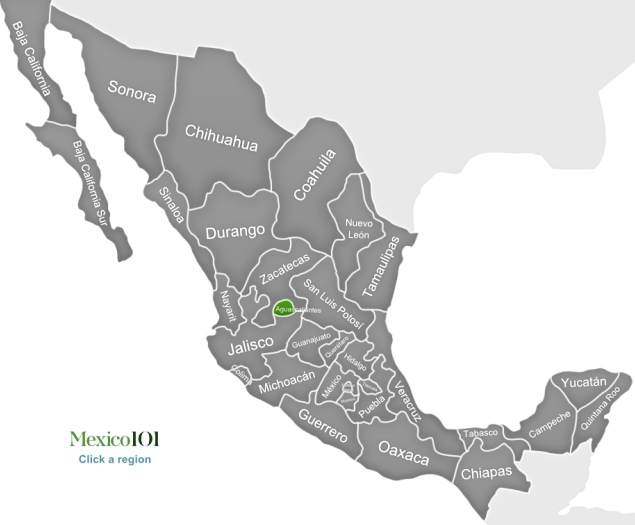 Located in central Mexico, the landlocked state of Aguascalientes is one of the smallest states in Mexico. However, despite its size, Aguascalientes packs in a punch with its cultural legacy and a distinct delectable culinary tradition. A well-known manufacturing hub with hundreds of maquiladoras distributed throughout the state, Aguascalientes is known for its fine brews of table wine, brandy and fruit liquors. Traditional sweets like Chocolatina and el ate as well as some sumptuous dishes like hog ribs in guava sauce and tamales with cheese and butter are famous in the state too.

Aguascalientes is located in the El Bajio or Bajio Occidental ranges. Characterised by mountainous regions as well as broad valleys, the state is drained by the Aguascalientes or San Pedro River. Throughout the year, it experiences a dry arid desert like climate punctuated by rains in the months of June through August. In areas with higher elevations like Sierra Fria and Cerro de San Juan, one can notice oak forest covers with pine and cedar trees. The valleys have a dry climate and hence have shunted and prickly vegetation. Biodiversity is rich in the area and the fauna comprises of a number of species including white tail deer, squirrels, coyotes, wolves, raccoon and wildcats.

Agriculture and Industries both contribute substantially towards the economy of Aguascalientes. Due to its central location, the state enjoys great access to the domestic markets of the country and is engaged in the manufacturing sector in a dominant fashion. Electronics, automotive parts, mechanical assemblies and metal handling have gained popularity in the area and companies like Xerox, Texas Instruments and Nissan have opened shop in the area. Wine production contributes significantly to the economy as well. Major crops grown in the stat include alfalfa, corn, peaches, chillies and wheat.

Aguascalientes is an experience in itself. From the expansive haciendas or wide tracts of land dating back to the colonial period (famous ones include San Bartolo, Ciénega Grandeand Puertecito de la Virgen) and natural hot spring baths to local fairs that come alive with the beats of Mexican culture, the state offers a vibrant and colourful ride for the tourist. The charming and rustic Vallodolid’s Bath with its Olympic sized swimming pool is a particular tourist attraction. The Great Baths at Ojocaliente and the Plaza del Torros at San Marcos (Mexico’s largest bull fighting ring) are other major tourist attractions and offer unique fascinating experiences.

Aguascalientes is the land of hot springs, great food, village fairs and luxurious vineyards. A holiday in the state will leave you with renewed vigour, fine brews and memories to be cherished for a long long time.