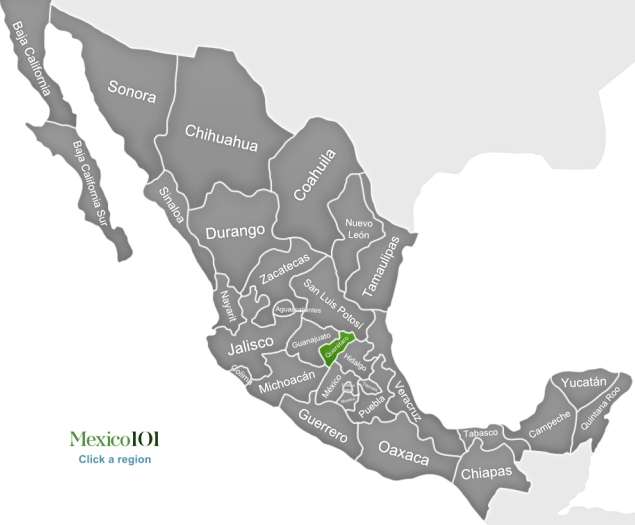 Queretaro has played an important role in shaping the history of Mexico as a nation. It is one of the first states where plans for the Mexican struggle for independence from Spain were hatched in the early 19th century. It is full of 18th and 19th century mansions, quaint cafes and walkways that take a visitor back to its colonial past and also showcase its multi-ethnic nature. Today, the state has also evolved as a major economic force. Since the city of Queretaro is located in close proximity to Mexico City, it has become a major manufacturing and commercial hub. However, despite the surge in economic activities, the historic downtown has not lost its unique charm. One can enjoy all the pleasures of the contemporary lifestyle and also take a bus ride around the old town to immerse themselves in a time that has long been bygone.

Located in north-central Mexico, the state of Queretaro can be divided into five different geographical regions. Towards the north lies the Sierra Gorda which is a part of the Sierra Madre Oriental region. With its rugged ranges, steep hills and deep valleys, the region is home to a large variety of flora and fauna. The Queretaro semi desert region and Central Valleys lie to the centre of the state and are characterised by comparatively arid and humid climates. Low lying flatlands called the El Bajio Queretaro run to the west of the state and merge into the neighbouring state of Guanajuato. La Sierra Queretana running to the south of Queretaro are ranges of high altitude with high peaks, canyons and steep valleys. These areas enjoy a comparatively pleasant weather and higher amounts of rainfall.

The proximity of the state to the nation’s capital as well as the access to road ways and an established network of infrastructure has contributed highly towards making Queretaro an economically active region. The state has a productive manufacturing sector which contributes to its GDP in a major way. Although the state has a booming agro-economy, its contribution to the economy has been diminishing when compared to manufacturing in line with a national trend. Other important avenues of income generation include traditional handicraft industries, tourism, mining, commercial activities as well as the finance and service based industries.

The state is full of natural as well as historic attractions. The pine clad ranges of the northern Sierra Gorda offer sweeping landscapes of nature in all its glory. Its tranquil ambience is perfect for a large number of outdoor activities. Moreover, the Franciscan Missions of the region which have been declared a UNESCO World Heritage are a delight to discover for the history buff. The wineries and vineyards in cities like El Marques make for fascinating day trips too. However, the feather in Queretaro’s cap is the heritage town of the capital city which with its colourful colonial mansions, exquisite specimens of Spanish architecture and quaint cobbled streets sweeps off the traveller into a place where time stands still.