0 Puebla Diaspora around the world 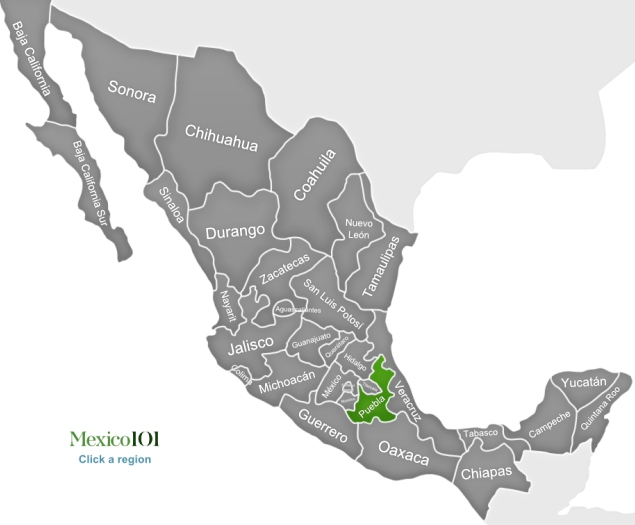 Puebla was created by angels if you were to believe in myth and is often spoken of as “The shrine of America”. Located in the very centre of Mexico, it was the city where the Mexican army defeated France way back during the 1800’s and today it is a historic town with ample places to go shopping.

One of the oldest in all of Mexico the colourful architecture of Puebla City is a taste for the surrounding state which is bordered by many others including Veracruz, Hidalgo and Guerrrero. Located to the east of the central highlands, Puebla is dominated by mountains but there is also a very large plateau to the south. That being said, the climate changes depending on which part you visit, it is warm in the north, average temperatures of 16 °C in the middle and then very cool in the volcanic or mountainous regions.

Dramatic growth in the region has seen the population rise from 1 million during 1980’s to the present day which stands at close to 6 million. Many of these peoples are belong to one of the many indigenous people which include the Totonacs, Popolocas, Nahuas, Otomi and Mixtecs. As with many of the states in Mexico, the majority are Roman Catholic (90%) and the remainder a mix of Protestant and Jehovah’s Witness.

With close to 60 education facilities and more than 100 research centres, Puebla is the second most successful state in Mexico in terms of education. As with the rest of the country, education is free in public schools and those who can afford it usually opt for private schools but overall, the high rate of literacy and qualifications in the state are very impressive while the world class facilities in medical institutions are fair way to judge how the research facilities are now prospering.

With over 2,000 historic buildings, a reputation for excellent shopping and a wide range of world class restaurants, Puebla City itself is a hotbed for tourism. Museums, ancient churches, iconic landmarks and fascinating markets – many cities are overlooked in Mexico by tourists but in this sense, Puebla seems to be doing something right.

Divided into seven different regions, the local economy is thriving and mostly based around agriculture, textiles and medical services. One of the country’s most industrialised states, it must be said that most of this development is focused on the city of Puebla itself and immediate surroundings. And then there is the agriculture which accounts for almost half the employment in Puebla. This is mostly down to the ideal weather and fertile lands but the way this state has continually produced onions, tomatoes, carrots, and squash along with many variety of fruit is a testament to the excellent irrigation in this part of Mexico.

Puebla City is no doubt the heart and main attraction in the state of Puebla but with beautiful landscapes in the surrounding region and a strong economy beneath the surface, it is only a matter of time until ore tourists start to venture out of this captivating city and into the countryside.