0 Nayarit Diaspora around the world 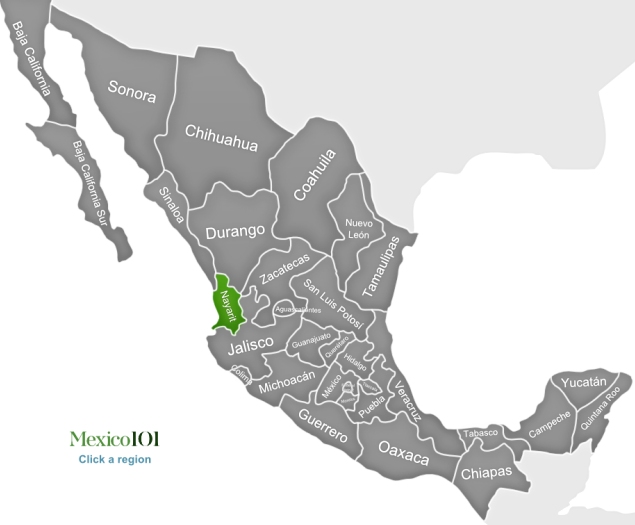 Located on the west coast of Mexico, Nayarit finds itself surrounded by four of the most prominent states in Mexico which are Jalisco, Durango, Sinaloa and Zacatecas. Characterized by imposing mountains such as Sanguanguey, San Juan, el Ceboruco and Picachos, you will find most of the population in this region living in the valleys while a lengthy stretch of coastline and nearby islands are home to the remainder.

In fact, a large number of the Pacific Ocean islands are governed by Nayarit in Mexico and these include Islas Marias, Islas Isabela and Las Marietas.

In excess of one million people are estimated to be living in the state of Nayarit which is made up of town folk and many indigenous peoples such as the Tepehuanos, Coras, Mexicaneros and Huicholes. These tribes and people are quite spread out across the landscape and although the Mexican majority speak Spanish as a first language, a small percentage of the Huicholes people still hold their native language to this day. Religion is also commonplace and 81% of Nayarit are Catholic while a small percentage are either Protestant or even atheist.

Education is mostly free in Mexico for anyone under the age of 16, except a lot of students go to private colleges instead of public schools. Every state in the country has a main university and it is considered a privilege to be accepted into any one of them.

Enchanting mangroves dominate the coastline while sweeping green fields are to be found in the valleys and interior of Nayarit. Guava, banana and coconut palm trees are commonplace, as too are towering pine trees in the mountain regions. And then there is the wildlife, for the state of Nayarit is also home to wild boars, rabbits, badgers, white deer, the ominous puma and an impressive range of bird species which includes doves and the exotic cojólite.

Agriculture and general farming make up the most part of the local economy but Nayarit still has a strong presence of financial, communication and mining institutions which help bolster the region. Tobacco is undoubtedly leading the way with sugarcane not far behind but then fertile lands also mean that bananas, mangos, corn, beans and many other produce is widely exported. As mentioned above, farming is prosperous here too and livestock including sheep, goats and pigs are always on the move.

Given the coastal nature of this state, Nayarit is also bolstered by a major fishing centre called San Blas. Renowned for the researching of oysters, this port is just as important as the many other natural resources named above that are also used for commercial means.

Tourism is not top of the list when it comes to the economy of Nayarit but it does still hold some attraction to those passing through. There are several museums which cater toward ironworks and embroidery but then the most popular is likely to be that of the museum for Amado Nervo, a famous local poet.

All considered, Nayarit is a prosperous state in Mexico with a strong economy, scenic landscapes and a beautiful stretch of coastline.