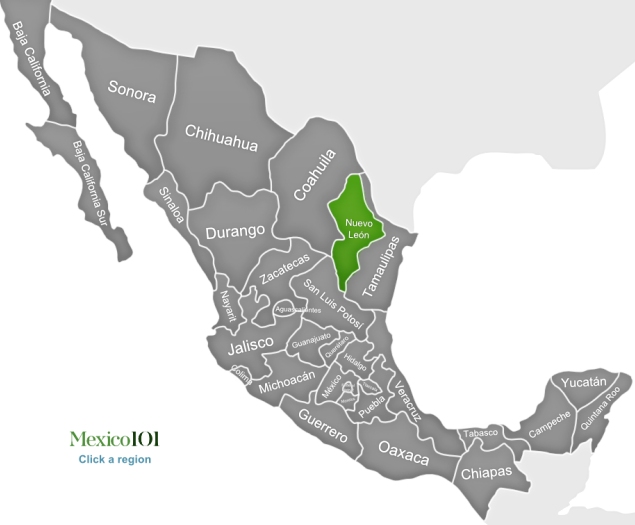 In north eastern Mexico, one encounters the state of Nuevo Leon which had once been named after the Kingdom of new Leon, an administrative territory of Spain’s Viceroyalty. With its unique historic legacy, strong industrial base and rugged but scenic topography, Nuevo Leon is a flourishing state today. It offers enthusiasts a number of outdoorsy action options, ranging from hiking and mountain biking to rappelling as well as rock climbing. Thus, it is not surprising to note that this Mexican state has made a name for itself in the world tourism circuit.

The Sierra Madre Oriental Ranges contributes majorly towards defining the state’s topographical features. Nuevo Leon is mostly, hot, dry and humid with very less annual precipitation. A hot and dry northern region is followed by mountainous areas enjoying a temperate climate in the central part of the state. The southern part of Nuevo Leon is arid in nature. Major rivers flowing through the area include the San Juan. Laguna de Labradores is an important natural lake and a source of vitality for the surrounding regions. The fauna in the region is diverse and includes species like bears, mountain lions and coyotes.

Although the northern parts of the state are more productive than the southern ones, Nuevo Leon boasts of the highest standards of living in Mexico. The state is heavily industrialized with iron works, steel factories, manufacturing assembly plants called maquiladoras as well as metal handling plants. The state has a strong presence in the agricultural sector too, with the prosperous “Orange Belt” being situates within the state’s boundaries. Mining, services based industries and trade and finance companies also have a significant presence in the state and end up contributing generously towards the prosperity of the state. Many higher educational centres and technical institutes are located in the capital city, thus attracting an annual influx of students from around the country every year besides boosting up the state’s literacy rates.

Nuevo Leon is a major player in the ecotourism market. With its natural caves, canyons, rivers, lakes, steep mountainous walls and waterfalls, the state offers great spots for rock climbing, hiking and rappelling. Some great outdoorsy spots are located in the Santiago region. Cerro El Potosí, the highest peak of the Sierra Madre Oriental located in Nuevo Leon attracts a large number of tourists as well. Monterrey, the capital city offers a great deal in terms of architectural specimens and recreational activities. But more fascinating experiences await you at Garcia Caves, where you can take a train to navigate the interiors of a 16-cave system sporting fascinating formations of stalactite and stalagmite as well as fossilized life forms on the cave walls. And in case, you want a taste of prehistoric history, head over to the Huasteca Canyons where cave paintings of animals and hunting scenes are still evident.

Nuevo Leon is an experience in itself. The next time you feel like experiencing thrills in the lap of nature, you know where to head.