0 Hidalgo Diaspora around the world 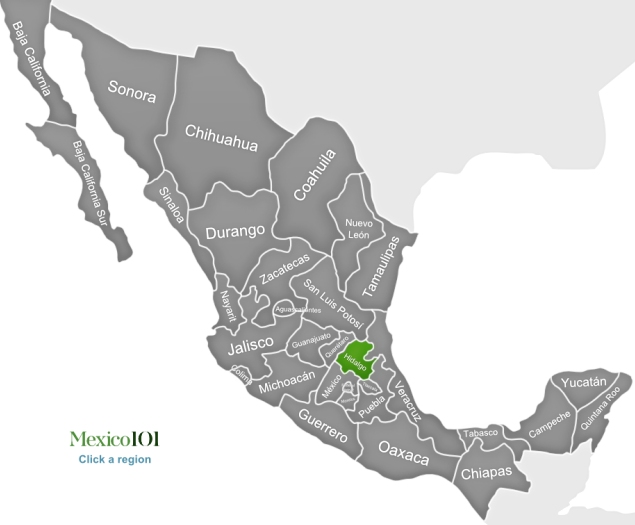 One of the most central states in Mexico and covering almost 8,000 square miles of the interior, Hidalgo is bordered by several other states including Veracruz, Puebla, Tlaxacala and Querétaro. Pachuca being the capital of the region, the climate is median, landscapes are varied and the economy is dominated by agriculture and textiles.

As mentioned above, Hidalgo is the most central state in Mexico but it is also home to several types of landscapes, for it is here you will find fertile lowlands to the north, mountains in the centre and the plateau in the south. Luscious and intersected by many important rivers such as the Moctezuma and Tula Rivers, the soil is rich in this region and so too is the scenery.

The mean average in terms of rainfall is quite high at 600 millimeters while temperature for the region is approximately 15°c although these to rise as high as 34°c a fall as low as 9°c.

With more than 3 million people, Hidalgo has a very large population and high density considering that more than 300 people can be found every square mile. That said, the faith of these peoples is quite similar with more than 80% being Roman Catholic and the remainder a split between Jehovah’s Witness and Protestant.

Public education is free in Mexico although some children attend private schools. You will find the University of Hidalgo right at the very centre of the state and then many med centres which offer free health care under the government to the locals.

You will find many different species of tree in the mountain regions although these are mostly oak, fir and pine with some smaller ranges of ebony hardwood trees, mahogany and mesquite. Plantations for coffee are also to be found in Hidalgo and the wildlife for this area is similar to neighboring states with a wide variety including jaguar, coyote, deer, skunk and even rattle snake.

Hidalgo has an excellent infrastructure when it comes to transport which includes a strong road and rail network along with an international airport. This certainly helps to bolster the cement or textile industries in the region but one should not forget the prominence of agriculture here, for Hidalgo is such a fertile land that corn, beans, wheat, coffee, fruit, oats and sugarcane can all be found in the same areas. However, these are mainly confined to lowland regions where there is a lot of rain and fertile soil as the rocky mountain areas are unsuitable for flora in general.

In terms of resources, it should also be pointed out that the region is rich in minerals such as iron, lead or zinc and these are used to produce metals for exporting.

There are thermal springs in Hidalgo which are popular with tourists but museums and libraries are more commonplace for the local use. Pachuca is the most famous of these which celebrates colonial times and then there is also a well know railroad museum in Tulancingo. Cathedrals and markets are popular in the capital, there are fairs and festivals while several National Parks like El Chico offer a quick escape for those interested in outdoor activities.

Varied in almost every way, Hidalgo is home to a fine mix of stunning landscapes, natural resources and a wide range of things to do.