0 Campeche Diaspora around the world 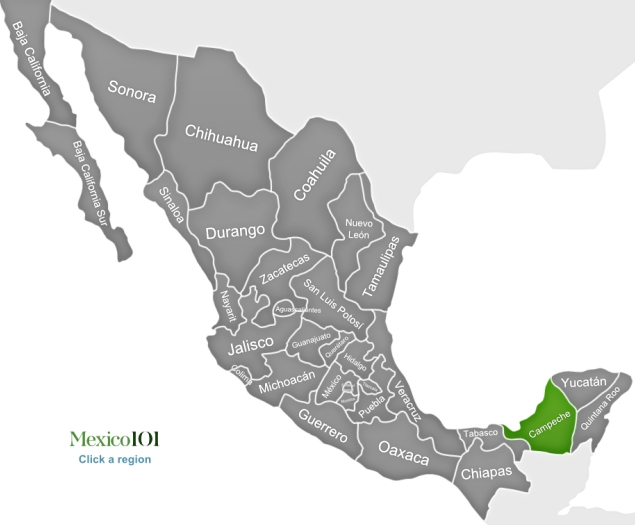 The capital of the state with the same name, Campeche was founded on top of a Mayan settlement by a famous conquistador Don Francisco de Montejo. Although difficult to reach by other means, the port made it extremely important since early times and it was a heavily fortified town which now hosts a litter of beautiful historical buildings.

Located to the south of the Yucatan Peninsula, Campeche enjoys a tropical climate with hardly any rainfall during the winter and tropical showers in the summer months. Average temperatures stay around 27 degrees and the terrain is mostly flat along the coast with some rainforests and protected parks to be found on the interior.

Population in Campeche has stayed just short of one million in recent years with most inhabitants living in the city itself. Maya is the most common indigenous language, followed closely by Chol and Tzeltal while the vast majority of Campeche is Catholic (63%) and the remainder being Protestant.

Unfortunately the vast majority of locals will leave in middle school which is far below the average across Mexico and this is despite some fantastic facilities, for Campeche also boasts a number of prominent education institutes including the prestigious Universidad Autonoma de Capeche which was founded way back in 1957.

Arguably the most famous aspect of Campeche is that it is a UNESCO World Heritage Site. Built during colonial period, the city is infused with colourful architecture and charming facades which make it a treat for the senses and popular with tourists. Narrow cobblestone streets make up the spaces in between and the absence of traffic, which is banned in many parts of the city, makes it a very endearing place to be.

Campeche is also known for the two main festivals which take place in the latter part of the year, Festival del Centro Histórico and Festival de Jazz. And then there are the religious festivals of which there are many including Champotón and Carnival which is several centuries old having been first established in 1582. Given that the region is a of Mayan descent, it is also overflowing with culture and this is no more evident than during the Day of the Dead when local produce can be found in abundance including corn, seafood, vegetables, and tropical fruits.