0 Sinaloa Diaspora around the world 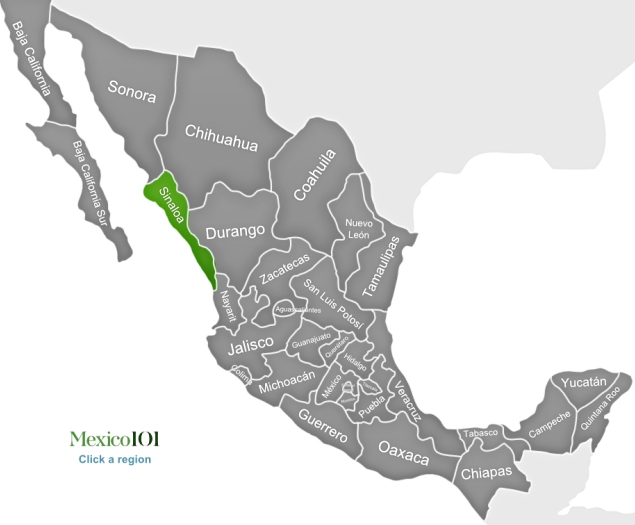 Although the state of Sinaloa has become almost synonymous with the infamous Sinaloa Drug Cartel today, this coastal state in north-western Mexico has a rich cultural legacy and colorful history to boast of. Once the home to indigenous tribes, Sinaloa was subsequently colonised by the Spanish just like most of Mexico. The state gave birth to a number of things, including a popular music style called ‘banda’ that is played using woodwinds and percussion instruments and damiana, a herb based drink whose origins can be traced back to the Mayan times. An ancient Mesoamerican ball game called Ulama is still played in Sinaloan villages. A major producer of agro products, this Mexican state indeed presents a unique subject for study.

Most of Sinaloa is a coastal strip of land bounded by the Gulf of California on one side and the Sierra Madre Occidental ranges on the other. From the mountain ranges on the east, many rivers drain the state to flow into the sea on the western side, carving fertile and scenic valleys on to the Sierra Madre foothills. Major rivers include Sinaloa, Fuerte and Culiacan. Owing to its advantageous geographical location, Sinaloa enjoys fertile soil well suited for farming (in fact, the state is often fondly referred to as the ‘breadbasket of Mexico’). Due to its proximity to the sea, the state enjoys a pleasant weather gradually changing from warm and tropical near the coast to colder near the foothills on the west.

Agriculture is the mainstay of Sinaloan economy. It is the largest producer of rice and vegetables in the country as well as the second largest producer of wheat and beans. The agriculture sector contributes to more than 20% of the state’s economic activity while the services sector comes in a close second. Livestock rearing, fishing and manufacturing facilities act as additional avenues for revenue generation. It is reported that the world’s largest drug trafficking and money laundering cartel has its headquarters in the Culiacan city of Sinaloa. Understandably, the presence of the cartel has influenced the local cultures and lifestyles considerably.

Sinaloa has a variety of breath-taking sights to offer the beholder. The pristine beaches of Mazatlan presents the Pacific coast in all its grandeur and the lighthouse of the town (which also happens to be the second tallest lighthouse in the world) stands proud and imposing. El Fuerte which houses several remnants of the Spanish colonial era is also a popular tourist destination. Topolabambo, famous for its sea port and fishing industries, offers a brilliant Pacific getaway as well. Quite close to the town itself is located a towering rock formation called the Farallón de San Ignacio where one can watch seals, sea lions and various varieties of migratory birds in their natural habitats.