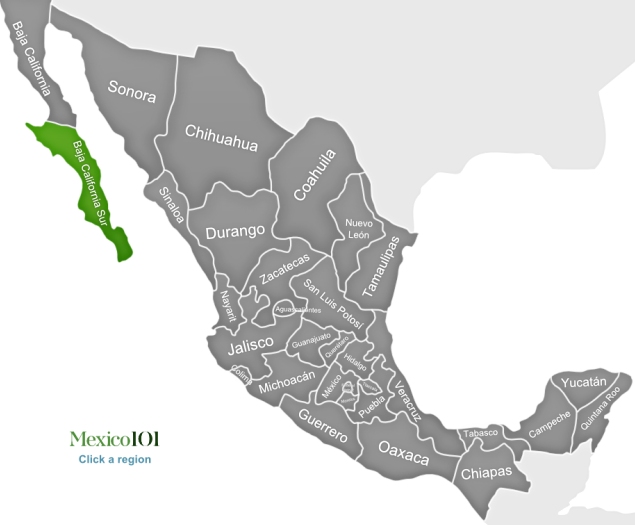 If you want to see the brilliant blue waters of the sea contrast with the harshness of the arid desert, you need to visit Baja California Sur. Situated in the north-western corner of Mexico, Baja California Sur is a state surrounded by the waters of the Pacific Ocean, Cortez Sea as well as the Gulf of California. Located to the south of the Baja California Peninsula, the state is sparsely populated but offers tourists the opportunity of enjoying stunning vistas of the sea in close embrace with the shoreline as well as indulging in various adventurous activities like mountain biking, hiking, snorkelling, diving, kayaking, snorkelling and surfing.

Baja California Sur is mainly made up of volcanic rock highlands and coastal plains which are wider on the Pacific side compared to the ones towards the Gulf of California. From a topographical standpoint, the state is divided into five main regions, namely, the Central Desert, the Vizcaino Desert, La Serrania, Los Cabos and the Magdalena Plains. The Central Desert has scant vegetation and experiences irregular rainfall. Sierra de la Gigante is the main mountainous region of the state. The Vizcaino Desert runs parallel to the Pacific coast while the flat Magdalena Plains are located near the Pacific coast as well. Los Cabos is characterised by stunning rock formations and plays host to a number of microclimate zones due to its unique topography. Baja California Sur, despite its arid climate, is home to a rich variety of flora and fauna. Some of these species are endemic in nature.

Traditionally, economic activity in the region has centred on tourism, fishing, salt-production and mining. The fishing industry in the region pertains to recreational fishing enthusiasts as well as commercial fishermen who are benefitted by the abundance of tuna, sardines and other varieties in surrounding water bodies. Livestock rearing has also been a source of revenue for the region. In recent years, the region has experienced a stimulus in the development of infrastructure and establishing commerce and service oriented industries as income avenues as well.

Los Cabos sums up the Baja California Sur experience. Here the Sea of Cortez meets the Pacific Ocean at Land’s End with its iconic rock formations. The Arch (El Arco) at Land’s End is a tourist favourite. While at Los Cabos, one can choose to experience the tranquillity of San Jose del Cabo as well as the party funk at Cabo San Lucas. The peaceful La Paz as well as the colonial town of Loreto teeming with Mexican folklore and tales of a chequered past strewn about its cobblestone streets are other popular destinations that attract travellers.

Whether you choose to laze around on a beach, click a photograph at the iconic El Arco, enjoy colonial architecture in all its splendour or just relax with a glass of wine and a view of the tranquil Sea, you cannot go wrong with visiting Baja California Sur.