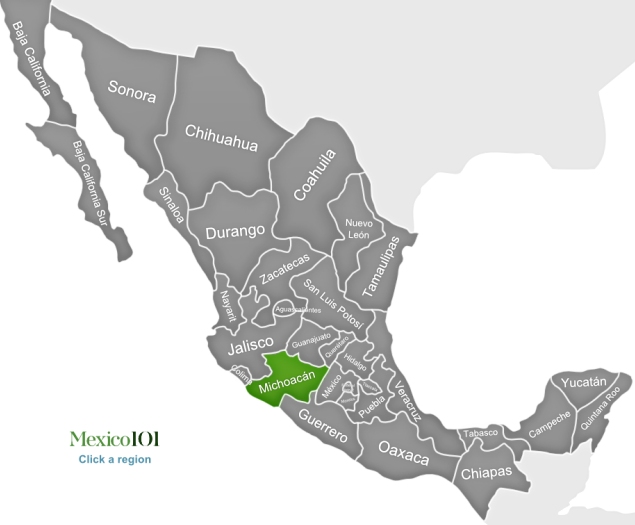 Located in west central Mexico and covering an area of approximately 23,114 square miles, Michoacan is bordered by Queretaro on the northeast, the Guanajuato on the north, Guerrero on the east and Pacific Ocean and Colima on the west. As a state, it has 113 municipalities and Morelia is the capital city.

Two large mountain ranges, the Sierra Madre del Sur and Transversal volcanic Sierra dominate the region and there are many volcanoes including Pico de Tancítaro and Patamban .Other volcanoes include Paricutín volcano and the twenty-six volcanic craters in its vicinity. Otherwise the landscapes are largely flat and Lake Chapala, Cuitzeo and Zirahuén also inhabit this area which is approximately 651 square miles.

The climate changes from place to place and mostly depends on the altitude or prevailing winds. With a tropical climate finding itself along the coastline, an average temperature of about 28° can be found while the central region experiences a climate with an average temperature of about 22°c. However, high-altitude regions can have freezing temperatures and the average rainfall ranges from 64 centimeters to 162 centimeters. The state has a wide variety of plant species which include forests of oak, pine and cedar. Mango trees are also found in the eastern and western parts, while the animal species include coyotes, skunks, armadillos, lynxes and squirrels, parrots and even eagles are found in the tropical regions.

The contributors of the economy include agriculture, forest products, livestock, fishing and crafts. Most people are employed in the agriculture, mining, manufacturing and commerce sectors. Agriculture is carried out during the rainy season. Irrigation farming is restricted to some areas. . The crops grown include corn, avocados, sorghum, strawberries, wheat, sugar cane and mangoes. Corn accounts for 43% of the crops harvested. 43% of farming in the territory is dedicated to the livestock.

The state provides public education from preschool level to high school. There is a failure rate from grade to grade with just under 5% leaving school permanently before finishing primary studies. The main reason for dropping out is poverty. High school level studies are mostly geared to vocational studies and many attend through distance education. There are public and private institutions of higher learning .The Universidad Michoacana de San Nicolás de Hidalgo is found in Morelia city. It is the oldest institution of higher education.

|In tourism, this is a wonderful state with many activities and attractions. Yes, you can find an amazing experience by visiting the Michoacan where you can visit the Barranca de Cupatitzo national park in the Uruapan. This can be the best choice for the whole family. As outlined above, the region also offers prolific vegetation and beautiful waterfalls from the Cupatitzio River making it a most desirable part of the country to visit.