0 Jalisco Diaspora around the world 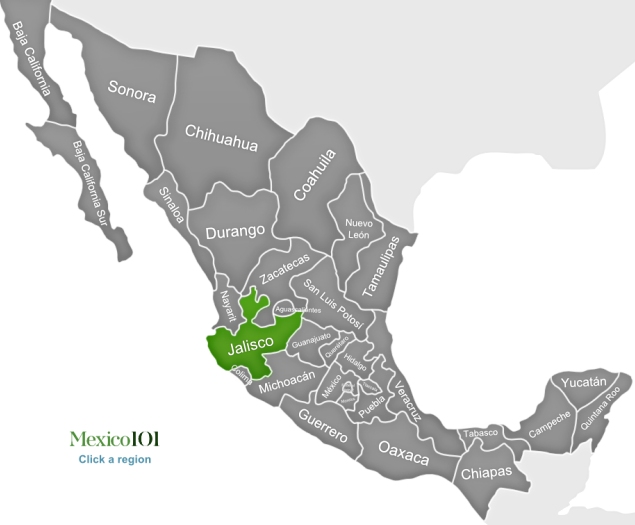 Jalisco is located in the centre of Mexico and covers approximately 30,941square miles. It is bordered to the northwest by the Nayarit state with Zacatecas, San Luis and the Aguascalientes to the north. Jalisco has 124 municipalities in all and Guadalajara is the capital city.

The landscape is mostly mountainous ranges including the Sierra Madre Occidental, Los Huicholes, San Isidro Mountains, Tequila volcano and the Los Guajalotes. Furthermore you can also find Lalo, Tapalpa, Cacoma and Manantlan meaning the state also has large valleys. The most important rivers are the Lerma-Santiago, the San Juan de los Lagos and the San Miguel Rivers, while Lake Chapala is the largest in Mexico. Other lakes include Zacoalco, San Marcos, and the Sayula lagoons are found in the state.

The state has a total of more than 6 million people. This is according to the 2000 statistics. 207 people per square mile. Almost all the people speak Spanish. 84% million people are Roman Catholic, 2% are protestant, the remaining percentage is Jehovah’s Witness and others have no religion.

The temperatures are 16 degrees Celsius. In June this increases to 23 degrees Celsius and then rainfall is heavy between June and September, averaging 53 inches per annum.

In terms of flora, plants include the rosewood, mahogany, and cedar trees, orchids and mosses. Coconut, lemon, and banana tree are also present. The pines, oak, fir, birch, and hazelnut trees are found in the cooler regions. Animals in the region are also plentiful with wolves, pumas, wildcats, coyotes, foxes, deer, badgers and jaguars all making the area their home. The birds include doves, sparrow hawks, grouse and eagles, while there are many different species of snakes.

The state has airports which provide international flights to and from Jalisco and in this sense there are also good transport facilities in the state. The economy is strong with it being ranked third in the Mexican states and then tourism is also an important sector of the economy. The state produces alcoholic beverages and tequila for export with fishing and mining being carried out in the southeast part of the state. The state is known as the main sugar producer.

The state produces sugar and corns and has large dairy and poultry farms. The crops grown are oats, beans, alfafa, onions, sorghum and chickpeas. The animals reared include cattle, goats, sheep and pigs. And then there is the public education which is free for the children aged 6-16 years. Many students go to private schools. The University of Guadalajara if located in the capital city.

There are many libraries and museums. Cocula has a museum for traditional Mexican music. The Tonala museum features traditional pottery and masks and paintings. There is a museum of paleontology. It is a popular museum of science and technology that includes a planetarium and one for the army and air force.

Jalisco truly has a beautiful range of architecture and the perfect geographic location. It is home of many festive mariachi bands which play at festivals and then the city also hosts rodeos, where the cowboys compete in riding and roping events. And then there is the Zoologico Guadalajara which is the main zoo in the city. Yes, Jalisco is thriving and there are good resorts for recreational activities which act as the perfect place to stay for visitors, not to mention the many other activities which can be found in the area such as rock climbing, fishing, and mountain biking.