0 Zacatecas Diaspora around the world 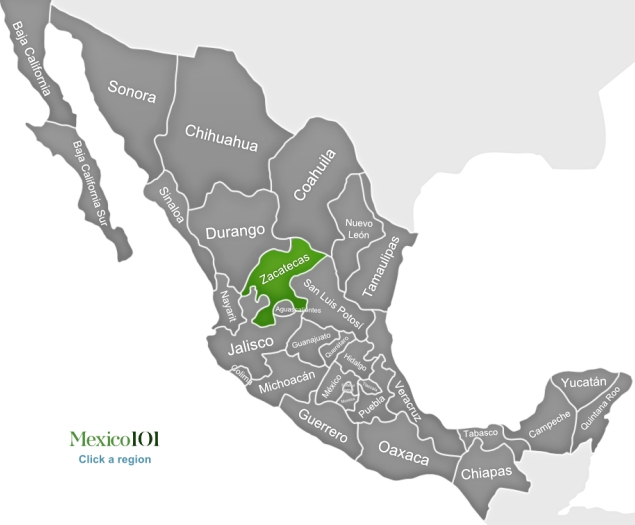 This is the capital of north central Mexico. It is a state of semiarid mountains and plains.iit lies in a central plateau. The western half is dominated by the Sierra Madre Occidental.Vegetation is scanty because of the light rains. There are no large rivers in this state to support irrigation. This has led to limited agriculture. The greatest industry is mining. Cattle rearing is the major activity. Mining makes it the biggest producer of minerals in Mexico. The Zacatecas is well known for its numerous examples of baroque architecture.

The main activity is mining. It is main producer of silver in the whole world. it also provides zinc in all Latin America. The activity is concentrated in Sombrerete and Fresnillo. The added value that is added outside the entity is the main problem facing the mining industry. Agricultural production is another activity in the state. Oatmeal, dry chile, and beans are produced. Other products include garlic, onion, carrots, tomatoes, tuna, peaches and guayaba.it depends on bovine for farming. Farming contributes 14% of the income. The population lives in extreme poverty conditions. It has low income per capita in the whole of Mexico. This is due to the low occupational capacity that the weak economy offers its people.

Attractions and features of Zacatecas

The beauty of this city is very attractive. The majestic slopes of El Grillo and La Bufa mountains add their beauty to the city. The state has many museums with credible historic value. Also the natural environment is good for the people who love scenic strolls. There are many hills which form the Sierra Madre Occidental and the Sierra Madre Oriental.

There are two river basins: The Interior Basin and the Pacific Basin. The pacific basin rivers run through other states before entering the Pacific Ocean.  The main rivers are Atengo, San Pedro, Jerez, and Valparaiso. The interior basin rivers do not reach the ocean. They include the Zaragoza, los Lazos, San Francisco and the Aguanaval.

The northern part has a chilly climate in winter. It is dry and mild during summer. The average annual rainfall is 28cm.

The north part has nopal cactus, yucca, huizache and the palm trees. The central region has a lot of pasture. The south part has thickets, pastures and oak forests.

Animals include wildcats, coyotes, Mexican opossums, deer, and the wild bear. The birds include macaws, eagles and the wild turkeys.

The area has a population of 18 people per square kilometer. All the citizens speak Spanish as the first language. Few people speak indigenous languages. 84% o the whole population are Roman Catholic, 2%are Protestants. In the year 2000, seventh day Adventists were 2,441, Jehovah’s Witness were 7,861 and the ones with no religion were 23,000.

Zacatecas is a vibrant city with many attractions and an abundance of culture. Year round, it is popular with visitors and this is largely due to the number of special events taking place each year such as include De la Morisma fair and the Zacatecas fair. Tourists also visit the Enrique Estrada Park and the cathedral.