0 Sonora Diaspora around the world 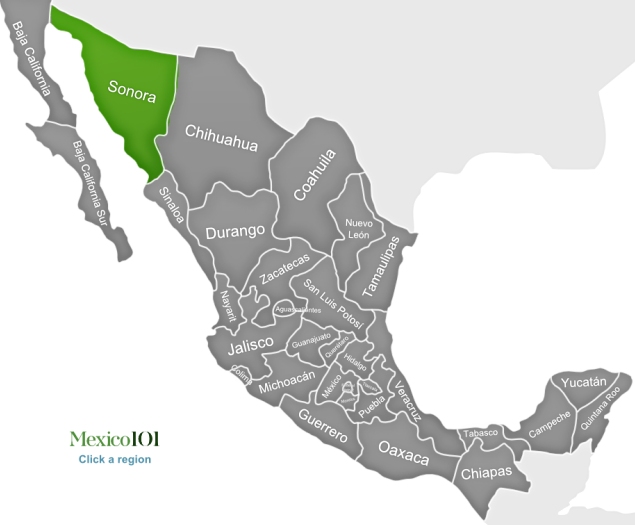 Located in the north western part of Mexico, the state of Sonora is bordered by the states of Chihuahua, Baja California and Sinaloa on three sides. To its north runs the US-Mexico border along the states of New Mexico and Arizona. On the west it enjoys a pretty much unbroken shoreline along the Gulf of California, thus enjoying a plethora of gorgeous beaches and plenty of seafood options. Home to different aboriginal tribes, the cultural landscape of Sonora is fascinating in itself. Today, the state is known for its agro-economy, its tourism industry as well as its relative economic and geographical advantage that has attracted immigration from other parts of the country.

The second largest state of Mexico, Sonora can be broadly classified into three natural geographic divisions. The Sierra Madre Occidental ranges run in a north-south direction in the eastern part of the state. Due to its high altitude, the mountains experience a pleasant cold weather, relatively higher precipitation and even light snowfall in the winters. Since the moisture laden winds blowing in from the west (Gulf of California) collides against the mountains, the Sierra Madre foothills experience high amounts of rainfall. The central part of Sonora consists of plains and rolling hills which experience a comparatively arid climate. The Western part of the state comprises of the Gulf of California coast. Most of the state is drained by a network of seasonal rain-fed rivers. However, an important perennial river in the region is River Colorado.

Sonora is famous for its varied biodiversity. The state is famous for its contributions to Mexico’s agro-economy as well as the livestock rearing, mining, manufacturing and industrial sectors. Traditionally, the rich mineral deposits in the Sierra Madre had made the state self-reliant despite its inhospitable weather. Since the state has access to a largely continuous shoreline, it enjoys a thriving fishing industry as well. The state shares a long border with the United States and this plays an important role in its economy, culture as well as politics. Due to its proximity to Mexico as well as its natural attractions, the state enjoys the influx of tourist dollars.

As a centre for ecotourism, Sonora scores top marks. From Isla Tiburón, an uninhabited island in the Gulf of California to the creek of Cuchujaqui where one can see umpteen number of migratory bird species, the state does not disappoint with its flora and fauna. The history enthusiast can also be excited at the thought of following through the Missions Trail which even includes missions that had been built practically in the middle of the desert. The beaches and the mountains are great for outdoor activities including hiking and diving and travellers flock to the Rocky Point on the coast to partake in these adventures. Not very far away from the Rocky Point is situated El Picanate, one of Mexico’s numerous dormant volcanoes.

With its offbeat tracks, nature trails, vibrant wildlife and colorful indigenous culture, Sonora packs in a surprise every step of the way for a traveller who wants to take away memories to be cherished for a very long time.