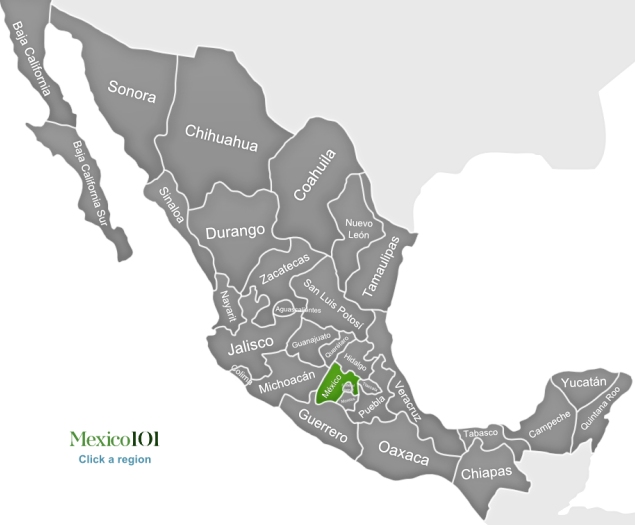 The state has 32 federal parts of Mexico. It is densely populated. It is divided into 125 municipalities. Its capital city is Toluca de. The population is approximately 15.18 million. In the past 20 years Mexico was considered as the ultimate urban disaster. It has been transformed by the economic and political reforms Lerdo into the hub of individualism, consumerism, and cultural diversity. It lies in an upland basin 2240 meters above the sea level. It is surrounded by a ring of active volcanoes and mountains. The state has many cities together.

It is the most polluted region. In 1999 pollution sent one million people to hospitals. More of the pollution comes from more than three million vehicles. Other causes are industries and small factories, fires and deforestation .Water shortage and garbage are also the main critical problems.

The city has a large number of private and public health centers. There are 47 specialized hospitals, 66 general hospitals, 7000 clinics, 542 surgical rooms and 286 clinical laboratories. Many of the health facilities are operated by the government which provides basic health care. The sanitary facilities are standard.

The city has the highest literacy rate. The students attend six years primary and three years of secondary school. Those who want to go to college should attend a college prep courses. There are important universities in the state. For example, the Autonomous University of Mexico, Colegio de Mexico, National Polytechnic institute and metropolitan autonomous university.

In Latin America, Mexico is the leading in publishing. It has more than 30 publishing houses. Mexico is the exporter of Spanish language television programming in America. More than 12 foreign bureaus are located in Mexico City. More than 30 daily newspapers including the weekly newspaper, magazines, English language daily are published in the city. There are more than a dozen foreign bureaus in the city.

The city plazas and parks are always crowded. It is hard to find a quiet place in a garden or park on the weekends. Chapultepec Park is the most treasured open space. The park is also very important historically. In the past it was used for recreation and hunting. Some of the museums are found in the park.

It is one of the most important cultural centers in Latin America. It has attracted more talent from Spanish speaking world. The stunning building plays host to concerts, ballets, and plays. The galleries feature artists from the whole world.  The walls have murals by Diego Rivera, Jose clement Orozco and David Alfaro Siqueiros.

There are many dance companies and theater groups. The people of Mexico go to the city to study fine art, dance schools and music.

The city received approximately 19 million visitors in 1999. More of its visitors are from United States and Canada. Others are from South America and Europe. The city has awesome sights for visitors and the locals. It has world class museums, shops, restraints, and hotels. Mexico City is the best place to spend your holiday with your family.