0 Oaxaca Diaspora around the world 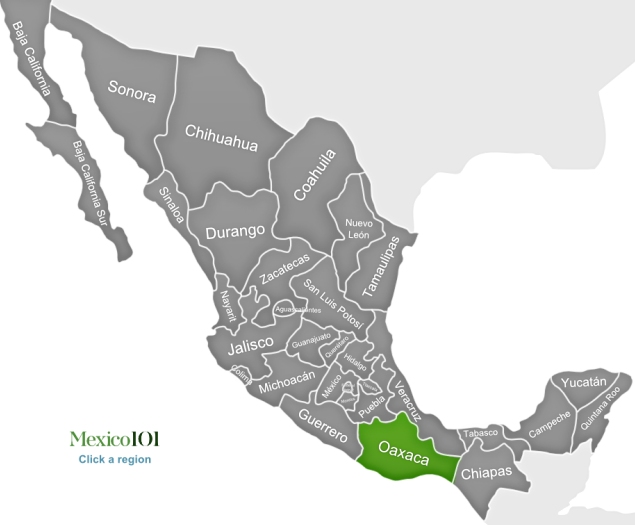 Often cited as the food capital of Mexico, Oaxaca in the south of the country is poor in terms of economy but rich instead with attractions. Infused with colourful markets, hertiage and stunning architecture, the town itself is a memorable encounter and the distant mountains make the traditional music here sound so much sweeter when it plays.

Bordered by the states of Veracruz, Guerrero, Chiapas and Puebla, the state is also next o the pacific and a tropical coastline. Although the region is actually more synonymous with mountains and it is here you will find an endless run of valleys with flowing rivers, steep canyons and ravines which make for some incredible scenery.

Hot and dry, hot and subtropical or semi hot and semi arrid; there are three different types of climate in this one region and they change depending on where you go. Rain usually arrives in the summer and fall while the upper highlands have freezing temperatures in December and the month of January.

Although it is quite a dense region, at nearly four million Oaxaca has only the tenth largest population in Mexico. With the vast majority of people in Oaxaca below the age of 30, it is a young region too but then also one with an ancient past, for indigepnous communities are most common here and most of the population speak indigonous languages. Other tribes present in the region include the Mixtec and Zapotec.

As mentioned before, Oaxaca is known for food and this is largely due to the fine resources and produce in the area such as tamales, tasaj and mescal. In fact, it is this very ingredients which have allowed local chefs, many of them Michelin star, to produce some of the finest meals available in Mexico. Barbacoa, chapulines and champurrado are all popular, as too is Oaxacan string cheese.

Even though it is a relatively small state, it also has the highest bio diversity in all of Mexico. In fact, there are more than 8,000 species of plant, 700 bird and over 1,000 vertebrate. Small mammals are found here too including deer, wildcats or reptiles, many of which are endangered. And then there are the National Parks, for Oaxaca has so many uncluding Chacahua, Benito Juarez and Huatulco National Parks which are some of the most beautiful in the country.

Oaxaca is a historical town where every building seems to tell a story and where a stroll beneath the facades is possibly the most interesting of things to do. Whether you visit the Ethnobotanical Garden, explore history in Oaxaca Museo de las Cultares or just marvel at Templo de Santo Domingo, the town leaves an impression and one which most visitors are unlikely to forget anytime soon.

Oaxaca is the most disadvantaged state in Mexico when it comes to economy and accounts for only 1% of the nations GDP. That being said, there are some prosperous areas with the largest to be fnd within the agriculture sector. In fact, more than one third of the population work in agricuulture and the rest divided between the services industry and commerce. There is however a presence of natural gas and oil which can eb seen in the refinery at Salinas Cruz.