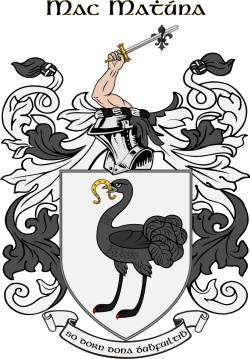 Design your own MCMAHON Family Crest

Mac Mathghamhna- anglicised MacMahon, McMahon, MacMann, Mahon & c. There seems little doubt that the root word is 'mathghamhan' -'bear' or 'bear-calf', and used as an epithet, which was popular among the O Briens in later medieval Ireland.

In Litriú nua the spelling is Mac Mathúna.

Perhaps the most important of the two major septs of this name was that of Thomond, who took their name from Mathgamain, grandson of Brian Boru. Mathgamain'ss father was Muirchetach Mór ua Briain, king of Ireland (1094-1119). Their territory was that of Corca Bhaiscinn in South West Clare. They became numerous in their homeland, and by the end of the 19th century their name had become the most numerous surname in Co Clare.

One tragic note is the death of their last chief in 1602, at the battle of Kinsale, killed, it is said, accidentally by his own son.

The other, entirely distinct, sept is that of Orghialla (Oriel). These MacMahons ruled the ancient territory of that name from the the 13th to the late 16th century. Oriel comprised modern Cos Armagh and Monaghan, and adjacent areas in Down, Louth and Fermanagh. In spite of the ruthless English expugnatio of clan holdings, they retained considerable influence, until Cromwellian times, in Co Monaghan.

By the time of the 'Census' of Sir William Petty in 1659, McMahon is listed as a 'Principal Irish Name' in:

Therlach McMahon of Kilrush appears in this last barony on the list of 'tituladoes' or 'gentlemen', among several others with native names. Many 'tituladoes', or gentlemen of property and standing, in the 'Census', further east in Ireland would be planters/settlers. Likewise, Mortagh McMahon in Kilmacduane parish, is described as a titulado or 'gentleman'.

Still in Co Clare, in the barony of Ibrickayne & borough of Enish (Ennis) Mahon/MacMahon is represented by 8 families.

For the Oriel sept:

Co Monaghan
listed as a 'Principal Irish Name', under the county name, are 112 families of McMaghone. Interestingly, the names of the 'tituladoes' appear largely to be of planter stock.

The 1890 births registrations, report most McMahons in counties Clare, Monaghan, Limerick and Dublin.

Maurice MacMahon, Lord of Moguien in Burgundy, France, and brother of John B. MacMahon, Marquis d'Éguilly (born in Limerick in 1715), was a captain in the Jacobite army of Bonny Prince Charlie in 1745/46. These brothers came from the Clare sept.

Hugh MacMahon (1660-1737), and his nephews Bernard and Ross Roe, were all archbishops of Armagh during the difficult penal times of the early 18th century. Hugh's mother, Eibhlin O Reilly, was the daughter of Colonel Philip O Reilly, a leader of the 1641 Rebellion. This MacMahon family were of the Oriel MacMahons.

Looking for family related to Sir John MacMahon born 1686 in Meath,Ireland and died in 1746 somewhere in Ireland, also another person would be Robert Joseph McMahon b 1706 county Clare Monaghan Ireland died May 5 1769 in Williamsburg,Virginia..

I am just trying to learn more. Someone guild me right?!?

Hi My Maiden name is McMahon. I am a descendant of Hugh McMahon of Cootehill Co. Cavan. Hugh was born in 1815 as far as I can tell and was sent to Australia (where I live) for being a naughty boy :)...not uncommon for us Aussies. I would love any information on Hugh if there is anybody out there that might be able to steer me in the right direction. I'm just starting out on my family history Thank you in advance Karen

Hi Karen Rumble (nee McMahon here again. apparently I got it all wrong and My ancestor Hugh is from County Clare. would truly love to hear any info at all for Hugh and family. not holding my breath though. Thanks all the same

Hello My name Is Ashley Marlow, My maternal grandfathers Name is Paul McMahon. I am trying to build my tree but am not making much headway when I comes to anyone beyond Peter P. McMahon who born somewhere around 1806 in Ireland and died Nov, 18th, 1856

Areas of Origin for MCMAHON

Write an email address and click 'Invite' to share this page with more members of the MCMAHON tribe.

Discover where the MCMAHON Family members live around the world

Show off the MCMAHON Family Crest…